Laurie's Glider Gazette
If you are a delicate flower who can start drama, but can't take it when directed back at you, this is NOT the site for you!! TURN BACK NOW!!! DO NOT ENTER!!!!! ENTER AT YOUR OWN RISK!!!! Tell your "JAG" lawyer to kiss my ass!!! Stefaniey, this means YOU!!!! 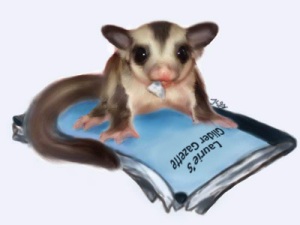 The best way to show a giraffe your love is to knit a scarf for it. - Anonymous

Ok the time has come to get Primo Neutered.... and I am scared.

I have had two neuters done, both turned out horrible. Both were done by Santa Clara Animal Hospital in Eugene Oregon. I am told that there are only 2 glider vets here in Eugene.

When I had my first boy neutered, he started to sm right after surgery. I guess they didnt have the e collar on him when he woke up. :lllloo: So they put him under again, re stitched him and sent us home. (remember at this time I knew nothing about gliders). No pain meds to go home on, nothing. The vet said to me " in 7 days try to take off his e collar and he should be fine".

So in 7 days I try to take it off. OMG it had been so tight it cut into his neck. By this time I am freaking out and f-ing mad. I call a freind who says to call Bourbon. Bourbon tells me how to make an e collar with the mole skin, and to start putting neosporin on his neck. Needless to say it was 30 days before he could have that collar off and was all healed.

Ok so I took my second boy in to get neutered. I called Linda (LSardou) and she helped me all the way. I was a nervous wreck. I asked that they do a pom on this time and that they have the e collar on him when he wakes up. I also asked for pain meds. I guess I should have TOLD, instead of asked.

I went back to get Kovu and guess what.. the vet comes out and says to me. " well we had to put him back under and re stitch him". I asked "why" and he said "becuase when he woke up he went after his ball sack and ripped it open." :affraid: I asked him why the e collar wasnt on him. His reply was " I dont know, I told them to have it on him when he woke. He must have woke up to fast". So they re stitched him and it became a pom off neuter. Kovu had the collar on for a week and then was ok.

I was told by a friend that there is another vet in town who does neuters. It is my understanding that she has not done a lot, but so far the ones she has done have come out great. No problems with Sming, no problems needing an e collar and she sends you home with pain meds, which my vet never did. He gave mine a " pain med injection".

So I am wondering does anyone know anything about this vet. Her name is Rebecca Lamarche. The clinic is " The City Center Cat & Bird Clinic" in Eugene, Oregon. Do you guys have any suggestions for me, things I can ask her?

I am scared as heck, and I know I need this neuter to be done.. but I am not sure where to go or who to trust.